During the event held on the 4th of October, 2010 and conducted by the German Chamber of Architects and DGNB Company at the EXPOREAL exhibition in Munich, representatives of the ÖGNI Company presented the Pre-certificate for DGNB Project. This certificate was awarded to the first Project in the Central Europe. One of the participants at this ceremony was Mr. Martin Drahovsky, the Chief Architect of the City of Kosice.

President of the ÖGNI during the Award ceremony of Pre-certificate of the Seal for Sustainable Construction. 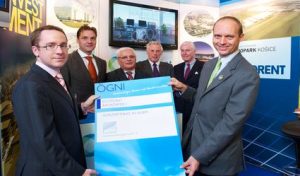 From the left: President of the ÖGNI Mr. P. Kaufmann and representatives of the investor Messrs. R. Badalik, O. Zavodsky, A. Maculan, J. Bischoff and R. Teichmann. 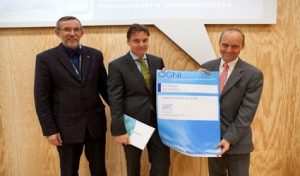 From the left: The Chief Architect of the City of Kosice Mr. M.Drahovsky and representatives of the investor Messrs. R. Badalik and R. Teichmann.